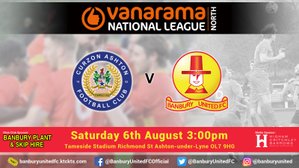 Historic day for the club

Saturday 6th August 2022 — a day that will go down in history, as Banbury United are set for their first-ever season competing at Step Two in the Vanarama National League North.

The excitement has been building since our historic Southern League Premier Central title win last season. The Puritans faithful will be hoping we can take our brilliant form from last season in to this one, after winning the League by an unprecedented 23 points, and having lost only two League games.

Andy Whing’s side have had a good pre-season overall, winning five games and losing two. However, one of those losses was a close game against a strong Oxford United side who came out 2-1 winners.

Banbury have managed to keep the majority of last season’s side intact and have added three signings: right back Jak Hickman; central midfielder Josh Smile; and, most recently, midfielder/defender Ben Radcliffe who joins on loan from Burton Albion.

Banbury’s forwards have been in good form this pre-season with Henry Landers, Ben Acquaye, Morgan Roberts and Jack Stevens combining for nine goals. The chemistry between these four is clear to see in their link-up play, and they will be vital if Andy Whing’s side are to have a successful season — especially after the Club lost last season’s top goalscorer Chris Wreh, who has signed for Southend United.

Saturday’s opponents Curzon Ashton finished 14th in the Vanarama National League North last season. They have bolstered their squad hugely ahead of this season, bringing in ten signings in an attempt to improve on last season. Curzon have had a mixed pre-season, having won four and lost two. Saturday’s game is sure to be intense and competitive, with both sides looking to get off to the perfect start.

Tickets are available on the gate at Curzon's Tameside Stadium, OL7 9HG - cash and card payments are taken.

We will be playing in last season's away kit tomorrow, with the approval of the league, due to supply issues with mandatory branding out of ours and our shirt suppliers control. We will launch our new kit next week and thank supporters for their patience with this.

Saturday marks the start of a new journey for Banbury United, one that seemed unlikely just a few years ago. Andy Whing and his side’s achievements last year were unbelievable and this season is set to be a brilliant journey at a level the Club has never been at before.

Your support last season was incredible: let’s carry that on and get behind Whingy and the lads on Saturday… and for the rest of the season!